It probably comes as no surprise that we’re a bunch-loving bunch here at BAPL; the only thing we love more than reading books is recommending them to others. So we asked library staff what was the best book they read this year. It can be a new best-seller, an old classic, or something in between. The suggestions are varied and wonderful. Check out the list below–maybe you’ll find your next great read! 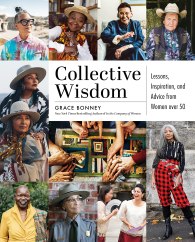 Kristen suggests Collective Wisdom: Lessons, Inspiration, and Advice from Women Over 50 by Grace Bonney. A collection of interviews and photographs with over 100 trailblazing women over 50 sharing their life insights and stories. This is a great book to pick up when you need some inspiration!

Matthew R. recommends Less (2017) by Andrew Sean Greer. From its utter hilarity throughout to its exploration of deep themes of aging, love, and the meaning of success, Less managed to delight me at every page turn. Greer won the Pulitzer Prize for this work of fiction and it shows – the book and its protagonist, Arthur Less, offer a joyful abundance of pointed prose.

Julia’s Three Picks (Because so many great books came out this year, I can’t pick *just* one!)

David’s pick is The Reading List by Sara Nisha Adams. A mysterious list of eight books appears in a library, marked ‘Just in case you need it,’ and sparks voyages of discovery and community in the lives of a number of people, including a teenager from a troubled home and a recent Indian widower. This is a lovely valentine to the power that books have to draw people together — and is the author’s first novel, to boot!

Mary Catherine recommends Broken Horses; a Memoir by singer Brandi Carlile. With unflinching honesty, positivity, and compassion, Carlile relates stories of her family, her experiences as an openly gay teen, her musical career, and the fascinating connections she has made along the way. For an extra treat, check out the audiobook version on cloudLibrary. Not only do you hear Brandi Carlile narrate her own story, she weaves in new solo recordings of songs as they relate to the events in the book.

Bradley says: One of my pleasures this year has been reading through the novels of western author Lewis B. Patten. Patten’s books are pulpy in the best sense of the word–descriptive and full of action, focused on a story without fancy frills (which also makes them short!), and able to convey suspense even when you know the ending will probably come out alright. Plus he keeps the romance to a nice minimum (ahem Zane Grey). His books aren’t as easy to find as they once were, so you have to take advantage of the library or the internet, but it is worth the effort if you like dusty old horses and stolid men of action. Or stolid horses of action and dusty old men.

Josh chose Parkland: Birth of a Movementby David Cullen. It’s a difficult topic to read about, the 2018 mass shooting at a Florida high school, and Cullen doesn’t shy from the painful reality. However, the book doesn’t focus on the violence itself; the shooter is never even mentioned by name. Instead, the author chronicles the astounding movement birthed by the tragedy. Many of the students from Parkland became nationally known gun reform activists and it’s inspiring to read about these brilliant young people taking on the world.

What was YOUR favorite book you read this year?