Jackie Mitchell threw herself into history on April 2, 1931

BAPL is digging deep in the archives for some historical “Throwback Thursday” posts (#tbt). This first one tells the story of the great Jackie Mitchell, who made history on the baseball field and even once came to the Lehigh Valley! Read about her history-making performance on April 2, 1931, as well as her appearance at the Allentown Fairgrounds in 1933. The original articles from the archives appear below the story.

Pitching for the Chattanooga Lookouts against the New York Yankees in front of a sold-out crowd, the left-handed teenager faced three of baseball’s greatest: Babe Ruth, Lou Gehrig, and Tony Lazerri. Mitchell struck out Ruth and Gehrig with 7 pitches, total. She walked Lazerri, then was pulled from the mound. The crowd of 4,000 sent her off with a minute-long standing ovation. Just a few days later, Baseball Commissioner Kenesaw Mountain Landis also sent Mitchell off, voiding her contract with the Chattanooga Lookouts under the claim that baseball was “too strenuous” for a woman.

But the woman played on, pitching and barnstorming with different teams all over the country – even making an appearance in the Lehigh Valley in 1933. Pitching for the Allentown Dukes at the Allentown Fair Grounds, 20 year old Jackie Mitchell faced the men of the Egypt Athletic Association. After just two innings, she was struck beneath the eye by a wild throw and, once again, forced to leave the mound. The Dukes ultimately won the game (final score: 9 to 7), and Mitchell continued traveling with her career for 3 more years.

Frustrated that her time on the field was given little respect, Mitchell retired from baseball in 1937 at age 23. She died in Fort Oglethorpe, GA in 1987 and is buried in Chatanooga, TN.

Baseball Almanac, Inc. Jackie Mitchell – The Pride of the Yankees. Retrieved from https://www.baseball-almanac.com/articles/aubrecht8.shtml 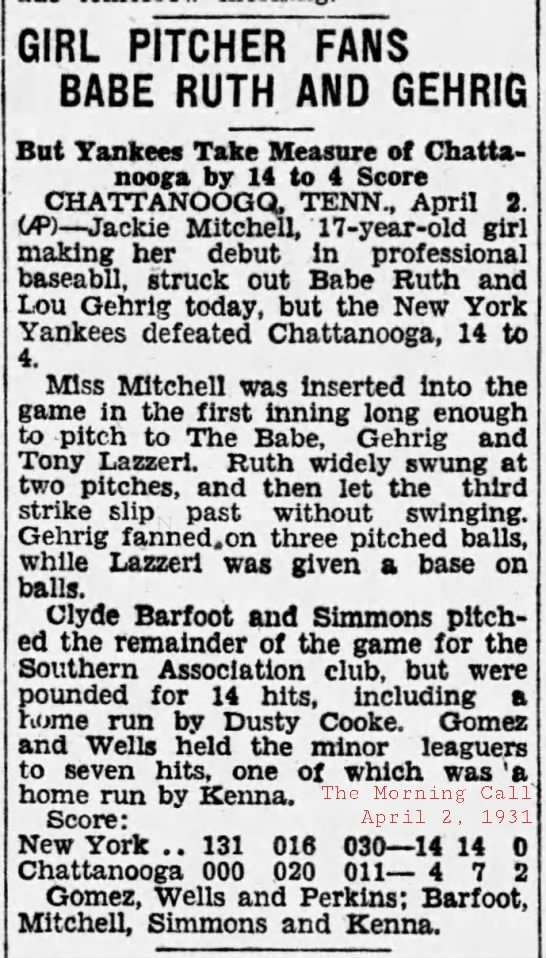 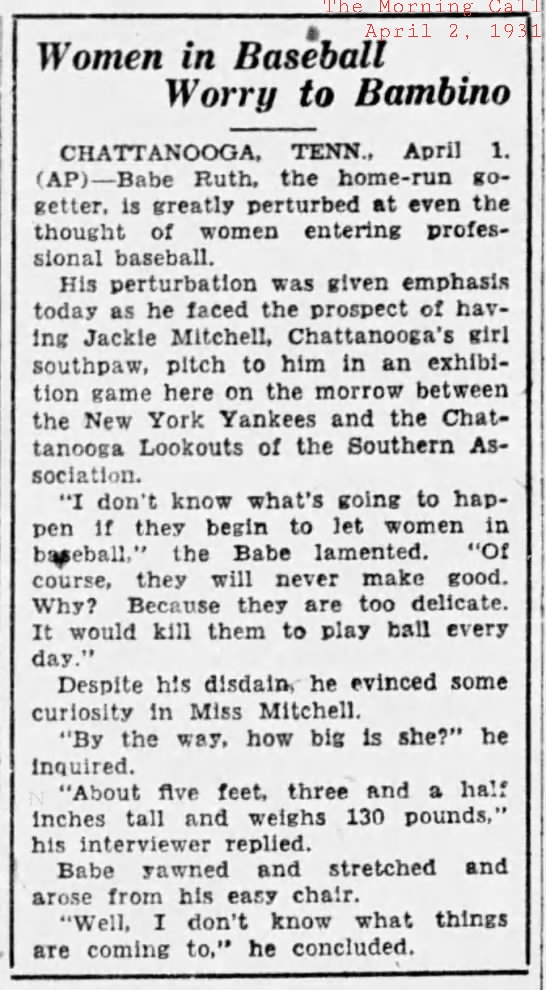