Share
Jenne from Youth Services has some more recommended young adult reads for you! See below to get recommended Young Adult books in this most recent edition of Jenne’s Top Tenne. (We’re aware it’s only four books this time but are not changing it to Jour’s Top Fix).

The Royce family live for the spotlight. As the stars of the reality TV show Rolling with the Royces, siblings Porsche, Bentley, and Maybach, lead drama-filled lives. Their mother, Mercedes, thinks nothing is too far to go to keep their family on the air. So when the show is in danger of cancellation, the siblings know they must do whatever it takes to make sure they get picked up for their sixth season. Between Porsche’s fake wedding, Bentley’s bad girl act, and Bach’s very real gambling addiction, the family starts to spin out of control.

I liked this book more than I thought I would. The Royces have a Kardashian-esque air about them, with a dash of trailer park for good measure. Their over the top lives and dysfunctional family situation make for a trashy but enticing story, with a plot that’s too crazy to believe. 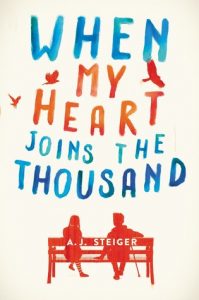 When My Heart Joins the Thousand by A. J. Steiger

Alvie has always been different. She understands animals much better than she understands people and she sees no need for friends. All she wants is to be left alone and to be independent. But all of that changes when she meets Stanley. For the first time, Alvie is drawn to someone, for reasons she can’t quite explain. As Stanley and Alvie grow closer, she realizes that while her differences make it hard for her to understand people, they don’t mean that she has to be alone.

It took me a bit to get into this book. I liked it from the start, but I didn’t love it until 2/3 of the way through. But by the end of the book I had tears in my eyes and was feeling a lot of things. I highly recommend this, for older teens, as well as adults. It’s a great story about finding love when you don’t think you deserve it.

The Belles by Dhonielle Clayton

In Orleans, beauty is everything. Not natural beauty, as humans are born with grey skin and red eyes. They must rely on the power of The Belles, a mysterious family of women who are the daughters of the Goddess of Beauty and possess the power to change the physical appearance and manners of the people of Orleans. The newest generation of Belles is just beginning their service, and Camellia knows that she must become the Favorite, the Belle chosen by the queen to perform all of the royal family’s beauty work. But as Camellia begins to see more of what goes on at the castle, she begins to question all she has been taught about The Belles.

This was another one I wasn’t sure I was going to like. But it’s unique premise and vague resemblance to the citizens of The Capital in The Hunger Games I was drawn into the story and soon found myself unable to put it down. A good choice for fans of stories where society and humanity are warped and cracking.

The Hazel Wood by Melissa Albert

Alice and Ella have been running from bad luck Alice’s whole life, never staying anywhere for more than a few months. All that Alice knows of her mother’s past is that she never wants to go back home to the Hazel Wood, the home where Alice’s grandmother, Althea, lives. Alice is fascinated by her grandmother, the author of a strange book of fairy tales called Tales from the Hinterland. But when Ella and Alice receive word that Althea has died it sets of a change of events that call into question everything Alice has every known. So she sets off to find the Hazel Wood and to find out who she is…and where she came from.

This book was CREEPY.  And a little confusing. The fairytales are interesting, but I felt like they left some unanswered questions. Generally I liked the book and the story but it didn’t entirely capture me as much as I think it wanted to. As far as twisted fairy tales go, it had some good ones, and what I especially liked is that they weren’t based on the classics that are told and retold. They were different and darker.