Imperial Airlines Flight 201/8 was a flight chartered by the United States Army to transport new recruits to Columbia, South Carolina for training. On November 8, 1961, at 9:24 PM EST, the aircraft crashed as it attempted to land at Byrd Field (now Richmond International Airport), near Richmond, Virginia. While there were no apparent impact-related injuries, all seventy-four passengers and three crew members died as a result of carbon monoxide asphyxiation in the ensuing fire and smoke, including twenty-nine young recruits from the Lehigh Valley, fourteen of which were from Bethlehem. Only two crew members—the captain and flight engineer—survived after escaping the burning wreckage.

The accident was investigated by the Civil Aeronautics Board (CAB), which attributed the cause to numerous errors committed by the flight crew, as well as poor management and improper maintenance by the airline. The CAB concluded that the “flight crew was not capable of performing the function or assuming the responsibility for the job they presumed to do.” 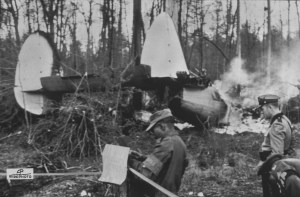 Photo of the aftermath of the crash

On June 8, 1972 a memorial to the Bethlehem victims was dedicated at Rose Garden Park in West Bethlehem. The memorial reads: “Dedicated to air crash victims — U.S. Army, Nov. 8, 1961.” The stone monument, about 3 feet high and 5 feet wide at its base, also lists the names of the 14 victims of the crash.

For a detailed look at the crash, visit here:

For a more in depth article on the crash, visit here:

Newspaper Articles from the New York Times and
Bethlehem Globe-Times chronicling the crash: