By 1921, Bethlehem’s old covered bridge was in disrepair and disuse after years of fires and floods and made its viability often in doubt.  Additionally, the new corporation of the South Bethlehem with Bethlehem facilitated a need to adequately connect the two parts of the city.  The newly formed Bethlehem Bridge Commission hired Rodgers & Hagerty Inc. in the summer of 1921 to construct the bridge.   Construction began later that year. The new bridge was completed in 1924 and dedicated on November 1st.  Originally the bridge had several ramps and branches on either side of the Lehigh, but has undergone several updates and changes in the years since. 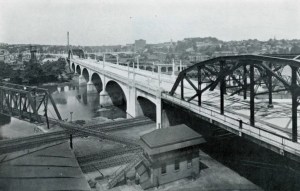 Some pertinent facts regarding the construction of the Hill-to-Hill Bridge:

Number of arch spans in bridge: 26

Concrete was provided by the Pennsylvania Cement Company (Bath location), Steel reinforcement by Bethlehem Steel, Sand by Morris Black of Bethlehem, PA, and castings by Bethlehem Foundry and Machine Company.

For even more information, visit this site.

1921 Photos of the Old Covered Bridge

Images from the Hill-to-Hill Bridge Construction