Have you ever wondered who lived in Bethlehem, Pennsylvania over one hundred years ago? Have you ever wondered who walked these very streets that you walk on today? After all, Bethlehem played host to some of the greatest people in American history. George Washington, Ben Franklin, and Alexander Hamilton are just a few of the people who visited our historic town. But who were the prominent citizens of the late 19th and early 20th centuries? Thanks to the Bethlehem Area Public Library archives, a document entitled Men of Bethlehem provides mini-biographies of dozens of men who lived and worked in Bethlehem over 100 years ago. According to the document, this document was created for two reasons:

MEN OF BETHLEHEM is issued as a book of ready utility for the newspaper offices as a ready reference for the artist and biographer. The chief aim, however, is to put into the reference libraries of publishers reproductions in half tones of recent photographs of men prominent in the commercial, professional, political and social activity of Bethlehem. Men who were responsible indirectly—Men who helped in the consolidation of the communities into a greater Bethlehem. 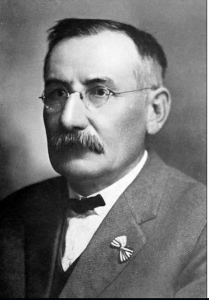 Among the many men (sadly no women as, alas, it was a less enlightened time) you can learn about from this historical document is one Dr. Mitchell Walter. Walter was the mayor of South Bethlehem from 1913 to 1915, back when South Bethlehem was a separate municipality. He did not start out as a politician, however. His family was a family of physicians, and he himself began practicing medicine with his father in Farmersville before moving to South Bethlehem in 1894. Besides politics and medicine, Dr. Mitchell Walter was also a well-known hunter, was a member of the Fishing Club and the Hiawatha Hunting Club, and was the president of the Lehigh Orpheum Theater Company.

Other individuals captured in this document include Archibald Johnson—the first mayor of the City of Bethlehem, Eugene Gifford Grace—the President of the Bethlehem Steel Corporation, and Henry Sturgis Drinker—President of Lehigh University at the time. All of these men and many more are featured, and once again, thanks to the library, anyone interested in learning about which men helped shape Bethlehem, Pennsylvania into what it is today can do so by means of perusing this historical text. The full document is available online here – give it a look!

This post was written by BAPL intern Jennifer Khawam of Moravian College.