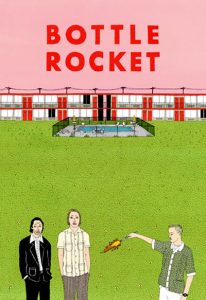 The world of Wes Anderson is coming to BAPL this spring. The filmmaker, known for his wit, ingenious style, and thoughtful craftsmanship, is the focus of a film series kicking off at the library this Saturday, January 20. First up is Anderson’s first feature film, Bottle Rocket (1996), the story of three best friends who attempt to escape their suburban boredom through a life of crime–with mixed results.

Series curator and adult reference services information technician Matthew Rothfuss praises Anderson’s attention to detail, and the way in which the filmmaker elevates the mundane to the extraordinary. Every Wes Anderson fan has a favorite of his movies; his is The Royal Tenenbaums, which follows a family of child geniuses as they reunite to face their estranged father’s terminal illness…which he is faking. Rothfuss says, “[Anderson] crafted an ordinary story about an extraordinary, highly dysfunctional family into such a sharp and witty film–without much of the cynicism of the modern films. I continue to look forward to every new Anderson film like a visit from an old friend who still has much to tell.”

Library Director Josh Berk is also a big Wes Anderson fan. “I’ve been into his films since Bottle Rocket, which I think is totally underrated. But if I had to pick my favorite I’d probably go with Life Aquatic,” he says. “Bill Murray as Steve Zissou is just so weird and wonderful. I love the underwater scenes and the music. It’s an adventure!”

Upcoming films in the series include:

And join us this Saturday at 2:00 p.m. at the Main Library for Bottle Rocket! Free, with light refreshments. Viewing audience is 17+