Here are just a few new YA books that BAPL has acquired recently for you to pick up and read. Remember, you’re never too old for young adult fiction. You may just find your next favorite book in this stack of YA picks…

The Astonishing Color of After by Emily X.R. Pan 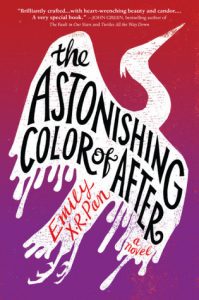 When Leigh Chen Sanders’ mother passes away, Leigh doesn’t believe it. Quite literally, actually. Leigh believes that her mother didn’t die, but turned into a bird. The Astonishing Color of After follows Leigh, a half-Asian and half-white teen as she travels to Taiwan in search of her mother, who she believes has turned into a bird. This tale combines the contemporary and with magical realism as the reader follows Leigh through a series of fantastical and normal events: from chasing ghosts to building a relationship with her grandparents, Leigh is on a whirlwind journey to find out what happened to her mother. Grief, love, hope, magic, and history all make their way into this new and breathtaking novel by Emily X.R. Pan.

In this unique debut novel told in verse, readers are thrown back in time to Rome in 1610, where young painter Artemisia Gentileschi must make decisions that will alter the course of her life. First, to decide if she wants to live her life as a nun, or as an assistant to her father, grinding pigment for paints. Second, if she wants to let a tragic event overtake her mind and distract her from her art. Today we know Artemisia as one of the greatest painters of all time, but this new novel shows just how difficult it was for her to claim this fame as a woman in her time period. Heart-wrenching, but also beautiful, this novel will call upon you to recall your own life decisions as you follow Artemisia as she makes hers.

A Land of Permanent Goodbyes by Atia Abawi

Syrian refugees still abound in the Middle East, and this new novel by Atia Abawi makes sure that no one forgets it. Tareq, a young Syrian teen, finds himself in a country that he has known and loved for all his life, but now torn apart by civil war. Everything that he once knew about his city is gone, in ruins. As a result of the destruction, as well as some threats by Daesh fighters, Tareq and his family decide to flee the country in an attempt to stay alive. The family travels from Syria to Turkey to Greece, encountering numberless unknowable dangers along the way. Tareq and his family have dig deep within themselves to find the bravery and persistence they need in order to survive in this novel, but this story is not just Tareq’s story. This is the story of every refugee hoping and praying that their voices are being heard. Reading this book will take you one step closer to making that happen.

Thrilling mystery and intrigue will follow you and our main character Kay Donovan in this new YA novel by Dana Mele. Kay is trying to leave behind old scars and memories as she makes her way up Bates Academy’s social hierarchy. She’s the star soccer player, has popular friends, and pretty much has the run of the school. That is, until a girl’s dead body is found in a nearby lake. It turns out this girl has left Kay a scavenger hunt for her to go on so she can solve her murder. As more and more suspects come to light, Kay finds herself in the middle of a full blown murder investigation. Soon Kay will learn that not everything is at it seems at Bates Academy and that there are more lies roaming the halls than there are truths.