A Farewell to the Boyd Theater

The History of the Boyd Theater

Ah, movies! The cultural time capsules preserved within a motion picture, full of great costume design and bad acting! Nah, just kidding, there are plenty of great movies out there. Movies have really kept society pushing through despite difficult times over the decades – they make us laugh, they make us cry, they terrify us – where would we be without movies?

What was the Boyd Theater, really? A historical monument struggling to stay afloat despite the changing times? A dilapidated building whose time had come? A place for expensive popcorn? It was all of these things, but most importantly, its previous name was Kurtz. The Boyd has gone through lots of names over the years, to say the least. It was constructed in 1919 and finished in 1920. I wonder if the original building doubled as a speakeasy? It’s not something they would have publicly advertised at the time, of course…

One of its incarnations was Colonial Billiard & Bowling Academy. And then it was Kurtz Restaurant & Cafe. And theeeen it was Kurtz Billiard & Bowling Academy. And finally it received its final name, Boyd Theater in 1934. The reason why it became the Boyd is because it was bought out by A. R. Boyd Enterprises in 1934 and the rest is, as they say, history.

The Reference Department at BAPL and I dug deep within our ancient and mysterious archives for information on the beloved building. We have all this material within our “Bethlehem Room” at the Main Library–if you’d like to dig deep into a local topic of your choice! Now, onward to some postcards that we found in our collection. 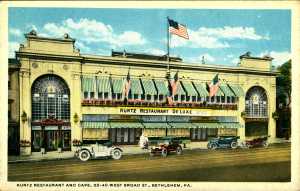 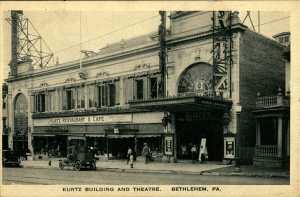 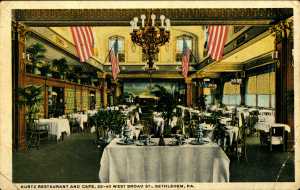 How can that be the Boyd Theater? Well, at the time, there was no internet and things were really boring back then. Where could you go to get dinner and entertainment? Kurtz filled that void with lots of live music. (I wouldn’t mind a violin serenading me as I eat chicken fingers at a restaurant, mind you).

The Kurtz Brothers were named Charles & John, in case you were curious. They originally owned a carpenter’s store that also manufactured equipment for “Banks, Libraries, Churches, Colleges, etc” and guess what? They’re still operating today! Kurtz Brothers began in 1894 and you can see their About Us page here. While pouring over records, it does appear consistent that the Boyd was listed as either Kurtz, Colonial, or Boyd over the years. I guess Kurtz thought Colonial sounded better but then it evolved into the Boyd.

Below is a piece of the Bethlehem City Directory in 1920. (This is in Microfilm format…what a #ThrowbackThursday moment, huh?) 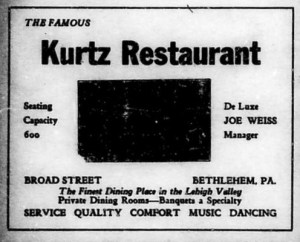 If you’re really curious about the area even before Kurtz, it was a bunch of private homes and a garage but that area was completely razed over to make room for the new buildings. Thankfully, they didn’t tear down any historical Moravian buildings in the process!

The Boyd area and its buildings were rented out to multiple businesses throughout its history. The Bethlehem Globe-Times (December 27, 1966) reported that the following businesses were present at some point:

The Morning Call (December 28, 1966) reported these buildings were also present:

And of course, that brings us to the present-day, a lovely movie theater. What was the first and last movie you remember seeing at the Boyd Theater?

I’m going to be showing my age and reluctantly saying that the first & last movie I saw at the Boyd was Snow Dogs (2002). I remember being more impressed with the architecture over the movie itself (sorry, fluffy dogs can’t beat 1920s art deco). I don’t remember seeing many movies after the one and I believe it’s because they generally did not have open-captions for movies at the time, unlike now. What’s the point of a deaf kid such as myself, watching a movie when they don’t understand a word of it? Still, the experience of going to Boyd was memorable enough!

Now I’m asking YOU lovely readers to share your fond memories of the theater! More specifically, The Boyd. The Boyd Theater may be gone, but our memories remain.

(If you’d like to see more local history, stop by the Main Library’s Bethlehem Room to check out some vintage articles and photographs today!) 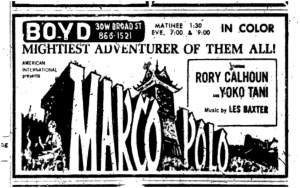 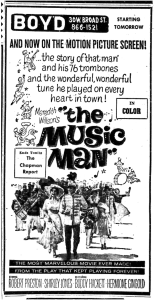 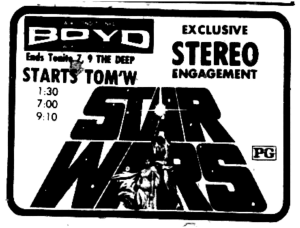 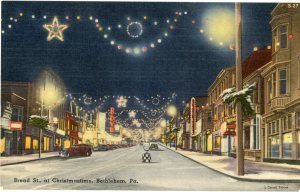 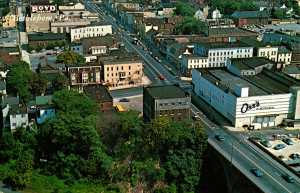