BAPL and the (Cold) Case of the Missing Keys

Library patron and Bethlehem resident Kathryn Hancock Kashner wanted to make light of Old Man Winter’s recent stay in the city. So she grabbed her keys, gathered the kids, packed the car with snowboards and sleds, and drove to the large hill near the Bethlehem Ice Rink for some fun in the snow. After going down the hill a bunch of times it was time to head back to the car. But Kashner realized that her car keys were missing! 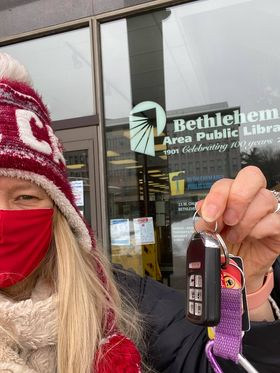 It was all downhill from there. She couldn’t find the keys anywhere and began to panic; she knew a replacement set would set her back hundreds of dollars. Just when all hope was lost, she received a phone call from the Bethlehem Area Public Library. The keys had been found!

Her salvation came in the form of a small yellow key tag. A fellow sledder had spotted the keys on the hill and, recognizing the yellow key tag as being the library card for BAPL, took them to the library so their owner could be identified.

Kashner picked up her keys yesterday and couldn’t be more relieved. Libraries can sure be helpful, sometimes even in ways you wouldn’t expect!

(Thanks for sharing your story and sending the pic, Kathy!)