BAPL is thrilled to announce it has awarded its portrait commission of local literary great H.D. to Angela Fraleigh, painter, professor, and chair of the Moravian College art department!

The completed museum-quality portrait will hang permanently in the Main Library at West Church Street, commemorating H.D. as a citizen of Bethlehem who made a tremendous contribution to literature and the world–and who, as a child, lived on land where the library now stands.

Bethlehem native Hilda Doolittle (1886-1961), known as H.D., drew on the experiences of her hometown throughout her long writing life. H.D.’s innovative and experimental poetry and prose established her as a leading Modernist in the early twentieth century, and she is widely recognized today as a queer, feminist visionary. She remains the most influential literary figure born in the Lehigh Valley.

Angela Fraleigh graduated with an MFA from Yale University and a BFA from Boston University.  She has exhibited at the Museum of Fine Arts Houston, the Kemper Museum of Contemporary Art in Kansas City, MO and has been the recipient of several awards and residencies including the Yale University Alice Kimball English grant, The Sharpe Walentas Program Brooklyn, NY and the Bemis Center for Contemporary Arts in Omaha, NE. Fraleigh most recently created a site-specific body of paintings for a solo exhibition at the Vanderbilt Mansion Museum in Hyde Park, NY, the Everson Museum of Art in Syracuse, NY and the Edward Hopper House Museum in Nyack, NY. Fraleigh looks forward to upcoming solo exhibitions at the Delaware Art Museum in 2019 and the Reading Public Museum in 2020. Her work “weaves together realism and abstraction in lush and complex works…that reimagine women’s roles in art history, literature, and contemporary media.”

“Not only is H.D.’s poetry evocative and mesmerizing,” says Fraleigh, “but her work aligns with my own interests, as she helps reconstruct a mythic past for women. It’s an honor to receive this commission.”

The portrait commission is in conjunction with Finding H.D., a 12-month long public exploration of the life and work of the poet, culminating in the premiere of a new play by Mock Turtle Marionette Theater in October of 2019 at Touchstone Theatre’s Festival Unbound. It is a partnership between the Lehigh University English Department, Mock Turtle Marionette Theater, the Bradbury-Sullivan LGBT Community Center, and BAPL. BAPL announced an open call for portrait submissions in the spring, and the commission was awarded by a committee of Finding H.D. stakeholders, artists, and community members.

“The idea for a portrait of H.D. came from renowned portrait artist Ben Fortunado Marcune, who approached us with a proposal in 2017,” says BAPL Executive Director Josh Berk. “Unfortunately, Ben passed away before work could begin on the painting. We were so saddened by this loss, but decided to move ahead with the portrait of Bethlehem’s greatest literary figure. We worked with our friends at Lehigh University as well as ArtsQuest, the City of Bethlehem, and the local arts community to conduct a search for a portrait artist. We were so impressed with all the submissions and so happy that Angela Fraleigh was chosen. It is going to be a beautiful work of art and a wonderful way to honor H.D.!”

The portrait is expected to be unveiled before the end of the year. To learn more about how you can help with the library’s fundraising campaign for the portrait, visit bapl.org/hd! 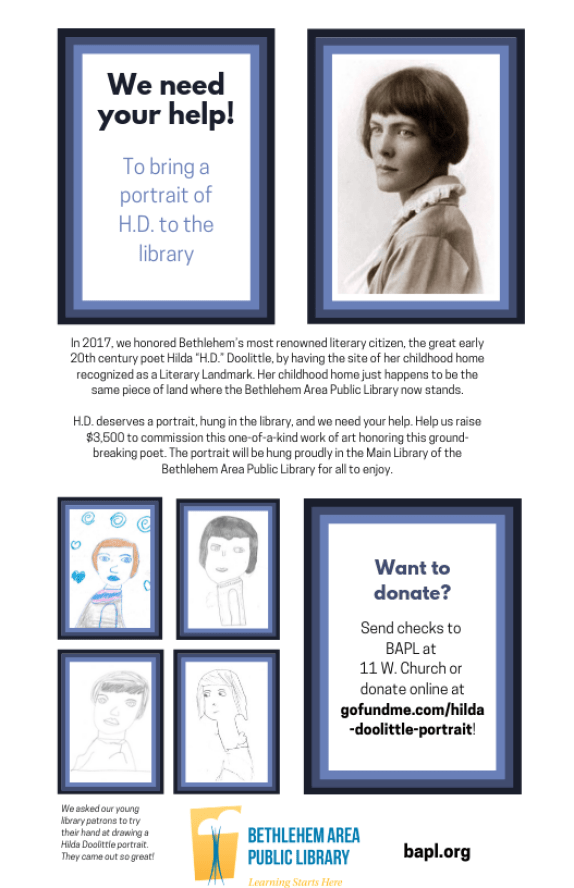