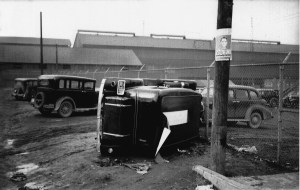 Cars of strikebreakers and company officials were overturned, and massive demonstrations were held

On March 24, 1941 a four-day steel workers’ strike began in Bethlehem. Workers walked out of factories, massive demonstrations were held, and tensions rose. A famous photograph captured an image of a car that been overturned in the tumult.

See pictures, newspaper articles, and more from BAPL on the 1941 strike at the link below, and see the timeline of Bethlehem history going back to 1741 here.