A Day in the BAPL

You may know that libraries, BAPL included, host a wide variety of events in addition to being the place where people come to check out books or do research. We host programs such as book sales, mindfulness training, children’s programs, films, concerts, even birthday parties. But did you know that we sometimes host them all on one day?!

On just this past Saturday at just one library location, all of the above occurred! It was a busy December 7th, with folks lined up for the book sale to start the day when the doors opened at 10am. The mindfulness class began soon after — a session led by Dr. Kevin Siddons on Qijong — a movement-based meditation art for learners of all ages. Then there was a birthday party in the Cohen Room and there were actually two films — one for kids and one for grown-ups. The children’s film was Polar Express and we had over 100 people in attendance. Kids had hot chocolate and a high school senior from our Teen Advisory Board showed up in a big red suit as Santa Claus! The other film was Budapest Noir, a Hungarian movie that is part of our series of art-house and foreign films you don’t get to see at the cineplex.

Later in the day there was a holiday concert with KeyStone A Cappella, a local, popular vocal group who performed to a large crowd. It was a magical evening.

During the eight hours we were open that day, 1,139 people came through the door of the Main Library. That’s 142 people an hour! That’s one person every 25 seconds! For eight hours! At just one library location! Just another day in the life of the library. Now if you’ll excuse us, we need a nap… 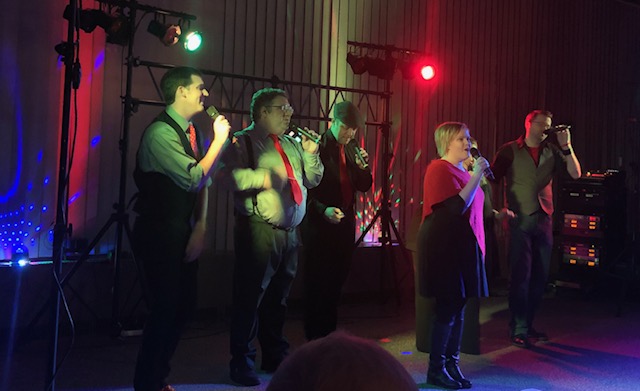 KeyStone A Capella at BAPL