Emil Signes has been on the library board of BAPL since 1985. That’s actually before BAPL was BAPL (it was just the Bethlehem Public Library when he started – the “Area” was added soon after he was appointed, as neighboring communities began to join). As he begins another year of service to the library, Dr. Signes took the opportunity to reflect on his many years with BAPL and his deep love of libraries. Shared with the library board on February 14, we like to think of it as a love letter to libraries. Thanks so much for sharing, Emil!

Let me explain a little bit about libraries and myself; about the joy libraries brought me. I’m still thrilled by the day—in the 1940s—when my mother took me to the East Side Branch of the Paterson, NJ Public Library to get my very own library card.  I was nine, and had been reading voraciously since I was four. All those books! In my dotage, as I walk around my house, there are rooms full of books that I admire. I’m glad I have four stories (a basement, an attic plus the normal two-story living space) to shelve them properly (I feel sorry for the ones that have to reside in the basement), joy when my kids and grandkids enjoy the ones I have and maybe—all are for the taking—even decide to take one or more for their own; extraordinary pain when I have to get rid of any. 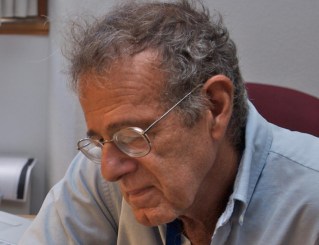 Emil Signes at the General Archives of the City of Madrid

During my pre-high school days in Paterson, a rare treat was to get on a bus and go to the main library on Broadway! Just today I searched for Paterson Public Library and found it still there on Broadway, but my East Side branch no longer exists.

At my Jesuit military high school—Xavier HS in Manhattan—I was a member of the Library Club. I don’t know how many library facilities MIT had, but I would hide out in a few of them from time to time, often falling asleep rather than working. (Nevertheless MIT saw fit to offer me a B.S and a M.S., in Metallurgy and Materials Science.) Then I moved from Cambridge, MA to Cambridge, England.

When I came back to the US in 1966, I started working for Bethlehem Steel; shortly thereafter they began to pare down the size of the company, trying desperately to keep it alive. I changed from Research Engineer to Director of Libraries. This was exciting, because as a passionate user, I now got to learn more about these great tools available to librarians and users, new stuff utilizing lots of automation—geez and wow!—and … I got my Masters Degree in Library Science at Rutgers. But after just a short time doing that, my main job became to dismantle the libraries, trying to find homes for some of our (formerly) valuable collection items. I kept a couple of the things I couldn’t bear to part with, but mostly watched as they were tossed away … not as painful as losing a breathing, living loved one, but painful nonetheless.

So “the library,” wherever it was, whatever form it took (the physical plant and the information, ancient scraps of paper or bits and bytes), has always been an important part of my life, as has imparting information. I was never a school teacher like my grandfather, my mother, and my daughter, but I looked at my life as a rugby coach to be one of a teacher. The fact that I rose to coach the US national team is, I’m sure, mainly the product of my passion for accumulating, sorting, and disseminating information. This started out with my mother, who had zero interest in sports of any kind but was a great teacher. In Paterson, she taught in three different elementary schools, became a principal, and later became the founder and first Director of Bilingual Education in what was then a largely Hispanic Paterson. As a coach, I too was a teacher; I utilized all the research skills I had learned in life, largely in library life.

In 1982—while working for Bethlehem Steel full-time and serving as a member of the City of Bethlehem’s Planning Commission— I completed two Spanish degrees. I obtained both my MA and a Ph.D. at Rutgers. Why? I had a need to put myself in touch with my 100% Spanish heritage. My family refers to the latter as my “recreational Ph.D.”  On a roll, and having used tons of different libraries’ resources, I stayed with Rutgers, and in 1984 I was officially a “Master of Library Service” when I got my M.L.S. there. (These followed a B.S. and M.S. at MIT and an M.A. at Lehigh, so … I guess I like to learn.)

When I moved to Bethlehem, one of the first things I was told was that I’d be perfect for the Library Board. I think it was by the chair of City Council—don’t remember the name, just the message. This was at a time that the Library’s “future” kept evolving, from part of the City of Bethlehem, to maybe be put under the School Board, to finally, a “Bethlehem Area” Public Library. I was afraid it would be another Bethlehem Steel, Revisited, but thanks to our then new Director Jack Berk, and now his son Josh, it’s thrived. And it’s been a fun fifty years in Bethlehem, thirty-five of them with the Library!

A small portion of Emil’s home library is pictured above.