Another week, another book! Here are five new books brought to you by the stacks of Bethlehem Area Public Library for you to check out and enjoy.

Circe by Madeline Miller
Madeline Miller’s retelling of the mythological Achilles in her novel The Song of Achilles was only the beginning in her myth-retelling journey. Her latest book is a retelling of Titan-born Circe, daughter of Helios, the Greek god of sun. After she discovers she has the power of witchcraft, the almighty Zeus banishes her to a deserted island where she works on perfecting her magical abilities, all while coming across many famous mythological figures like the Minotaur, Icarus, Medea, and Odysseus. Danger abounds, however, and Circe must call on all her strength to choose who she belongs with: the gods, or mortal humans.

The Great Alone by Kristin Hannah
The Nightingale, a historical fiction WWII novel by Kristin Hannah, drew a large audience of readers when it was first released. Her next novel, The Great Alone, has been no different. In 1974, Ernt Allbright has just come home from the Vietnam war and has decided to move his family north to Alaska to live off the grid. Leni, Allbright’s daughter, has found herself amidst her parents’ tumultuous relationship, only wishing she had somewhere she could feel like she belongs. At first, the Allbright’s move is filled with sunny days and friendly locals, but soon, winter comes and it takes all of the family’s strength to survive. Heaps of snow, constant darkness, and Ernt’s deteriorating mental health all become challenges for a family that set off to the northern state to try to live a simpler life. Needless to say, their lives become far from simple throughout the course of this sweeping historical fiction novel.

Before We Were Yours by Lisa Wingate 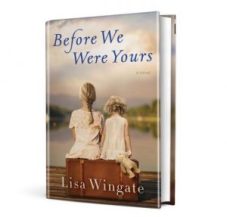 Best-selling author Lisa Wingate’s latest novel is based on the true story of Georgia Tann, a director of a Memphis adoption organization that kidnapped and sold poor children to the wealthy, Before We Were Yours explores the lives of children taken away from their family, and a woman trying to discover more about her disturbing family history. In 1939, twelve-year-old Rill Foss and her siblings are kidnapped from their family’s shanty boat while their father is away and are forcibly taken to a Tennessee Children’s Home Society orphanage. In present day South Carolina, Avery Stafford is a living a wonderful life with a successful career and her new fiancé. Soon, however, Avery discovers more about her family’s dark history than she ever could have imagined while helping her father during a health crisis, leading her to investigate her family’s past. Described by the book’s official synopsis as “riveting, wrenching, and ultimately uplifting,” Before We Were Yours is sure to keep readers flipping pages.

An American Marriage by Tayari Jones
Named as Oprah’s new book club selection, An American Marriage by Tayari Jones follows newlyweds Celestial and Roy. Roy is a successful executive and Celestial is an up-and-coming artist. Their world is turned upside down when Roy is arrested and sentenced to twelve years of prison for a crime that Celestial is certain that he did not commit. However, as the years go on, Celestial finds herself unable to love Roy as she once did. She gets closer and closer to Roy’s best man and her childhood friend, Andre. After five years, Roy’s conviction is overturned and he returns home to his wife. Things, however, are not what they used to be. As a story about the unjust incarceration system in the United States and the effects it has on loved ones, An American Marriage will surely be one of your next favorite literary fiction reads.

The Flight Attendant by Chris Bohjalian
From author Chris Bohjalian comes a new mystery thriller entitled The Flight Attendant. This new novel follows Cassandra Bowen, a flight attendant that one day wakes up in a Dubai hotel to find a dead man next to her. The problem is, Cassandra can’t remember what happened the night before and whether or not she was the murderer. Questions begin to pile up as she is met by the FBI at the airport gate when she lands in New York, and soon it becomes too late to tell the truth about what really happened that one fateful night. Did Cassandra kill him? If she didn’t, then who did? Readers will surely be eager to find out as soon as they get their hands on this book.

This post was written by BAPL’s intern from Moravian College, Jennifer Khawam.