We were recently asked an interesting question by the City’s Director of Equity and Inclusion, our friend Janine Santoro. Were there important women in the history of BAPL that we could highlight as part of the City’s Women’s History Month Celebration? Good question, Janine! We knew that there must be, as women played a prominent role in leadership positions throughout the history of most libraries. But what specific leaders could we honor? We of course enjoy research so hit the archives to see what we might find. 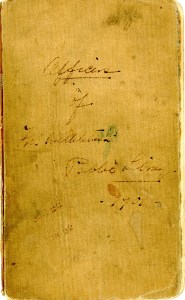 One of the first items we located was an entry in the minutes books of the “Free Library of the Bethlehems” from 1900. It spoke of “nine prominent women” from Bethlehem and Fountain Hill who met late that year to “consider the need of a Public Library in the Bethlehems and to devise methods by which it might be established.” There were private, or membership/subscription-based in the City prior to then, including the Bethlehem Congregational Library and the Bethlehem Library Company going back to the 18th century. But these 20th century leaders were the first to conceive of a truly public library–free and open to all–in Bethlehem.

Our first question was, who exactly were these nine prominent women? The minute books listed them under their husband’s names, as was often the case at the time. We read of Mrs. H.F.J. Porter, Mrs. J. Mortimer Levering, Mrs. Wm. W. Coleman, Mrs. G.B. Linderman, and Miss Minnie Erwin. Only Minnie, who was not married, had her name listed. The other eight were listed as “Mrs.” and then the name of their husbands.

BAPL Reference Librarian Kristen Leipert started to research the question further. “These ladies of Bethlehem society have been my true joy of the week,” Kristen said. She was able to find their names by heading to our Genealogy Research databases and searching in Ancestry Library Edition using names and location, in this case Bethlehem, Northampton, Pennsylvania, USA. Sometimes names of people and streets are transcribed incorrectly, but the site offers a column of “Suggested Records” and links to various other records like birth, marriage, and death certificates, and school yearbooks. These help to clarify spellings and locations. Find a Grave was also helpful in figuring out relationships!

So rather than nameless prominent women known only as their husband’s wives, we’d like to introduce you to:

The names of some additional ladies of the Library Committee were uncovered as well. These include: Grace Wolle and Libbie O. Luckenbach. These are some very well-known names to students of Bethlehem history. Luckenbach Mill was an important place of business and still stands in downtown Bethlehem. Jennie Linderman’s husband, Garrett, was the son of Lucy, whose father was Lehigh founder Asa Packer and the library at LU bears her name.  Peter, Christian Jacob and John Frederick Wolle were among the city’s earliest leaders, and Augustus Wolle built the Bethlehem Rolling Mill and Iron company, a predecessor of Bethlehem Steel. It was J. Fred Wolle who founded the Bach Choir.

But back to the ladies and the library! They were clearly skilled organizers and administrators because after meeting in late 1900s, the first free reading rooms were opened to the public just a few months later on February 1, 1901. This required quick work in raising money, acquiring the space, building a library collection, and myriad other details. They did all this work without much credit, just as groups of women did in cities all across the country. And the ones here in Bethlehem did a fine job. To quote an article from 1901 covering the opening of the library:

Quite a large number of people inspected the rooms during the day and spoke very highly of the cozy surroundings and the manner in which the rooms are equipped. Many of the visitors expressed a desire to patronize the library, which every one thinks supplies a long-felt necessity in Bethlehem.

Some other prominent ladies who deserve mention were the librarians who did the day-to-day work of running the organization. The first Head Librarian was Mary A. Reichel, who was followed by Isabel Turner and Elizabeth Burrow. Harriet Root took over in 1923 and ran the library successfully for the next three decades.