Tales from the Archives: “As To Vaccination”

This article is part of an ongoing series to let people know what kinds of things are hanging out in our local history archive, the Bethlehem Room, as well as the local history services we can provide.

Letter to the editor

While fulfilling patrons’ various research requests I’ve looked through a lot of old Bethlehem newspapers from the last few decades of the 19th century and the first few of the 20th century. In many of them appear articles and little items dealing with smallpox and its impact on our community. Often the pieces will be short announcements of an outbreak within a local family, or the status of someone suffering from the disease, or, of course, their death from it. Occasionally, there will be warnings that the disease is in nearby towns and that people need to be vigilant. In one edition of the Bethlehem Daily Times from 1882, there is a clear call by editors—even naming the individual town leaders to whom the call is addressed—that a smallpox hospital needs to be established before it is too late. I’ve even seen the editors just insert the comment “Get the vaccination for smallpox” among the local bits and pieces of news for the different Bethlehem boroughs (remember, they were separate cities back then). 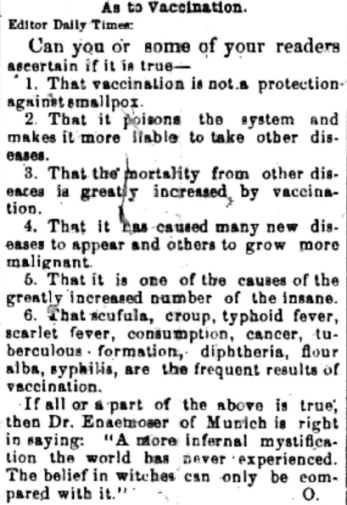 In one edition of the Daily Times from March 7, 1881, a letter to the editor is published (smack in the center of the front page) that is remarkable in its clarity for laying out the various rumors about the purported dangers of the smallpox vaccine. The author lists claims, and wants someone to “ascertain if it is true” what they have heard. Some of the fears include that the vaccine doesn’t work, that it can cause other diseases to be more malignant, and that it is responsible for the “greatly increased number of the insane.” They finish with a quotation from a Dr. Ennemoser, a German doctor who believed in “animal magnetism” and was often quoted in anti-vaccination writing in the 1880s, presumably because his quote is so dramatic. [See the picture of the Daily Times page with this article.]

In an article written in late 1882 for Public Health Papers and Reports, Dr. John Detwiller of Bethlehem wrote that there was an outbreak of smallpox in South Bethlehem in March of that year (exactly one year after the letter to the editor!). In it he praised the Health Boards of the local boroughs for acting swiftly to prevent a massive infection of the populace. Forty years later, in October 1921, Moravian College was put under quarantine after a student came down with smallpox, as reported around the country at the time. Vaccinations were swiftly administered.

Edward Jenner famously developed the smallpox vaccine in 1796 from cowpox. Well into the 19th century, one of the rumors about the vaccine was that it would cause people to grow horns and hooves. Fortunately, enough people were able to disregard much of the panic about the vaccine so that smallpox was eradicated in the 20th century, the only human disease to be successfully suppressed in this way.