The Revolutionary War often seems a distant memory for many Americans. Residents of Bethlehem might share this faraway concept of such distant historical events.  Our city, however, played host to many important figures during the Revolutionary War, including the commander of the Continental Army himself, General George Washington. 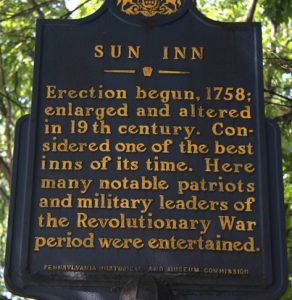 According to a recent article from 69 News, Washington stayed in Bethlehem at the Sun Inn in 1782 from July 25th to the 26th on a return trip from a Philadelphia conference.  Washington, on the recommendation of other contemporary military officers (such as the Marquis de Chastellux), may have visited Bethlehem because of the great reputation of the Sun Inn, known for having great food and clean places to sleep.

Local historians also discovered that Washington may have left behind personal papers and possessions at Bethlehem’s Burnside Plantation. According to Lehigh Valley Live, these possessions may have been stored as early as 1777, before his visit to the Sun Inn. Those materials were supposedly left in a brick kiln that was guarded by forty soldiers. Unfortunately, recent attempts to locate the kiln have been unsuccessful.

Nevertheless, the fact that George Washington set foot in Bethlehem, PA multiple times is definitely a reason for local pride. He even wrote in his journals about his time in Bethlehem.  George Washington’s time in this great historic place will no doubt continue to be a part of American history that the City is, and always will be, proud of.

This post was written by Moravian College intern Jennifer Khawam.